Another week and another brand new route. I decided once again to head for the Birchin Clough car park on the Snake Road, this place has fast become a firm favourite for me. The area is just simply stunning. The beautiful pine forests with Kinder Scout lurking to the south makes for great viewing. Today however, the aim wasn’t Kinder, it was another peat covered favourite by the name of Bleaklow. 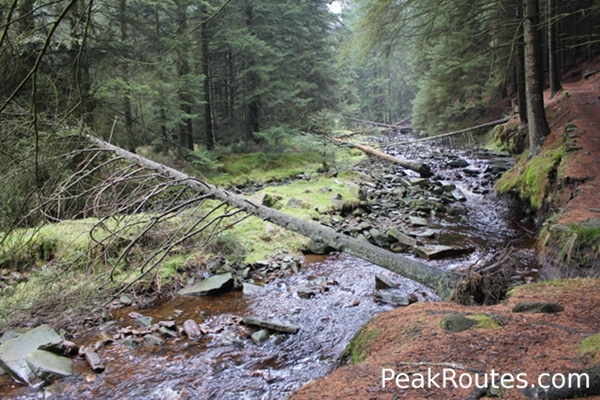 I set off from the Birchin Clough car park at around 10am and headed over the road down into the forest. I headed north following the river that winds under pines up Lady Clough. Today was to be the day that I would make the very first PeakRoutes.com podcast. I begun recording an introduction as I meandered alongside the tranquil flowing river. It had been an idea spawned by my frequent AudioBoo entries with which I had been summarising my walks in audio form. I decided it would be a great addition to my websites to have a larger audio accompaniment, even if no one was to listen it would be a great historical record to have an audible account as well as images. 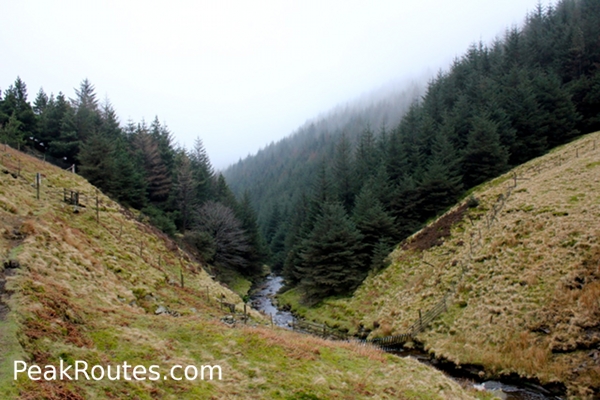 The going was good today and I made swift progress through the forest as the track climbed up and away from the river. It rose towards the edge of the road and then dropped back down again as I prepared to leave the edge of the forest. Lady Clough opened out in front of me and I could then see the cloud hugging the surrounding hills. After crossing a stream that flows into Lady Clough river I climbed upwards to walk along side the Snake Road.

I crossed over the road at OS Grid Reference SK 0962 9287 and headed for Doctor’s Gate. I recorded another part for the podcast and then joined the Roman Road that rises to meet the Pennine Way. By this point I was rising into the cloud base and the mist was surrounding me. I proceeded upwards along the ancient route and listened to the sound of the grouse as I let my mind wander. It was at this point as I marched on through the mist along the cobbled path that I wondered what if must have been like here in Roman times. I could picture in my imagination the sight of a group armoured Roman soldier marching out of the mist towards me. How fantastic would it be to be able to wind back the clock to witness such a sight.

Anyway… Back to the work. I met the Pennine Way at SK 0900 9332 and turned north towards Bleaklow. The mist was thick and visibility was down to around 20 metres maximum at this point. I proceeded along Devil’s Dike which rises gently, the path then winds through Groughs and around Cloughs as it makes its way up to Bleaklow Head.

In no time at all I was standing at the very top of Bleaklow. I had not seen another soul or soul less person all morning 🙂 the place felt very bleak indeed as the cloud silently brushed across the top of this vast expanse of peat. I recorded another section of audio and then found the path over towards Bleaklow Stones.. I say the word “path” very loosely as there isn’t really a path of sorts. There Is a faint track that weaves across while you follow the Stake marked grass covered Groughs.

The route can become rather confusing at this point if you don’t keep your wits and your compass about you. I have learned from previous experiences that the thing to do is walk on a bearing and ignore what is happening under foot. The paths that do appear along this stretch are rather misleading. You begin to follow what looks like a path for it to fizzle out to nothing or spin around in totally the wrong direction. As I just said, the key to success in cloudy condition along this section is to walk on a bearing.

After an exhilarating 30 minutes of navigational skill refreshing I arrived at Bleaklow Stones, I was very surprised to have 3G signal so I placed my backpack down and begun broadcasting some live video to Bambuser. Not that you could see a great deal but you do get a good idea of what it was like for me up there today.

After a short break and an AudioBoo submission I decided to keep moving. Last time I was here I walked up from Howden Reservoir and the weather was stunning, I sat and admired the view for what must have been half an hour. The low cloud today however meant that the view was rather less spectacular. Not to worry, I soon began dropping down towards “The Ridge” and I was amazed to see a handful of mountain hares out in front of me. They looked spectacular with their brilliant white coats against the dark greens and browns of Alport Moor.

I decided to have a slight change of route at this point. I had originally planned to head across the top of Alport towards Alport Castles, drop down to the mouth of the valley and then pick up the roman road back to the car park. I have done this sections before in the past so I decided to go a little off piste and explore some areas where I have never set foot before. I chose to head down into Alport Dale from SK 1148 9461, I headed down towards the river and followed its course for a few minutes. I decided to head back up out the other side of the valley and climb up to the top near SK 1154 9353. The view from here was magnificent.. If the climb alone wasn’t enough to take my breath away then the view certainly was. The view down Alport from this angle is stunning. 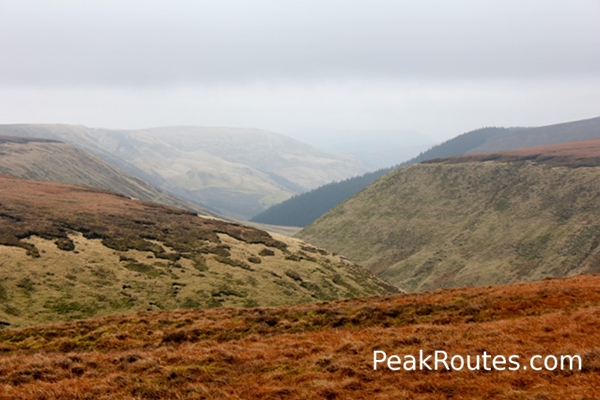 I carried on along the moor and crossed the top of Nether Reddale Clough, there are no paths here but I was below the cloud base so made a beeline for the head of Birchin Clough. I was once again met by another glorious view. An angle over towards Kinder that I had never witnessed before. The northern edge of Kinder was framed perfectly by the falling hillsides at Birchin Clough and the spruce lined banks of Lady Clough. I was glad that I had diverted from my original plan as I saw a new side to Alport Moor.

In no time at all I had begun the steep decent down the path from SK 1095 9163 to the car park. I had managed to record a good half an hours worth of audio for the podcast, I’m sure I’ll probably thin this down to around 20 minutes during the editing process though. Another great new route, some old favourites revisited and some new places discovered.

Keep an eye or ear out for the forthcoming podcast. I’m a newcomer to podcasting so will have a look into the logistics and get a link posted here for you to be able to grab it from iTunes. Thanks for reading and your continued support. Join me again next week when I will hopefully be heading further north towards Black Hill. Images, words, video and audio will follow swiftly afterwards.