I’m always keeping a watchful eye on the weather to spot some nice walking windows, sometimes though the need to walk overtakes the importance of nice weather and you just have to head out. I’m not scared of a little rain which is a good thing as this year has offered up plenty of it. When the weather looks bad I just adjust my plans accordingly and plan a route that will keep us out of the worst of it. Today was one of those days where staying low was a good choice, a months worth of rain had been forecast over a 24 hour period and it came down with full force as we walked 🙂 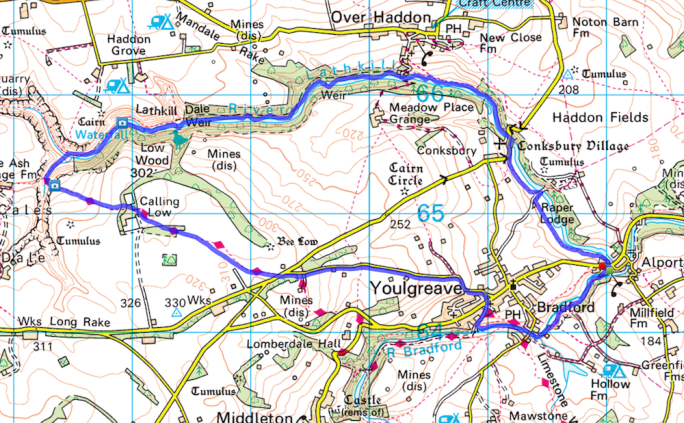 We started off by parking the cars at Alport and then heading northwards up Lathkill Dale from SK 2202 6455. The rain was coming down hard at this point and it didn’t relent at all throughout the day. We wandered while chatting up to one of the many impressive Weirs that are along the River Lathkill, The one pictured below can be found at SK 2145 6518.

We continued on up this wonderful dale passing many great looking spots up to Conksbury Bridge at SK 2117 6561, This interesting historic bridge is a Grade-II-listed structure from the 18th century. The rain was particularly heavy at this point so sadly I don’t have any pictures to show you from today. Here is an image of the bridge that can be found on the Geograph website. 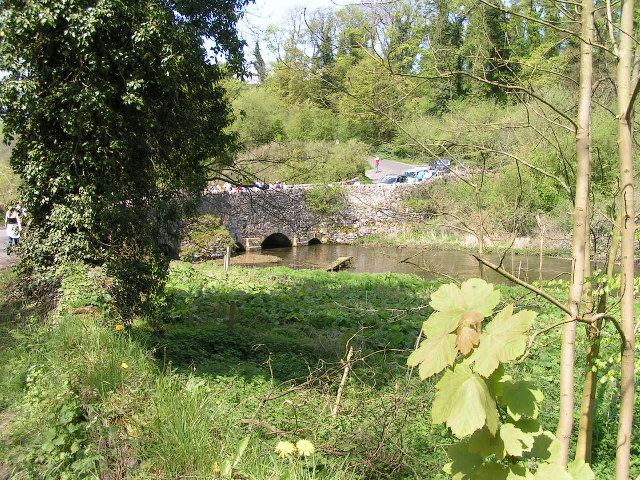 As you proceed up the Valley from Conksbury Bridge it opens out slightly and you can see the many wiers that alter the flow of the river, You really can’t help but notice how clear the water is that flows through here. The Dale itself is littered with signs of its past where it was widely mined for Lead, There is even the remains of an aqueduct and a ruined pump house near the old Mandale Mine.

We decided to leave Lathkill Dale at SK 1747 6553 by heading over the bridge and joining the Limestone Way in Cales Dale. We followed the way as it climbed up the steep steps then came out on to farmland which then leads across towards Calling Low. We were out in the open then on which meant we were met by the full force of today’s weather. It was a misty wet wander across the fields as we were just below the cloud line today, in no time at all though we arrived at the road at SK 1927 6447. We crossed over then decided to leave the Limestone Way by headed down Moor Lane to Youlgreave. Moor Lane is one the many Quiet Lanes in the area and its an interesting concept that I welcome. Here is the definition from the Department for Transport “Quiet Lanes are a Countryside Agency initiative, which has the support of the Department for Transport. Quiet Lanes are minor rural roads which are appropriate for shared use by walkers, cyclists, horse riders and motorised users. They should have low traffic flows travelling at low speeds.”

After Walking down Moor Lane we arrived in the narrow back streets of Youlgreave, we Proceed down Holywell Lane to the Bridge of the River Bradford at SK 2089 6399. We followed the river down stream and in no time at all reached the Swimming Area at SK 2112 6405. I doubt you would have wanted to swim in there today as not only was in raining it was pretty cold. I can imagine this place gets rather busy in the summer months.

From the swimming area its a nice gentle walk down the dale past Rheinstor Rock and then to were we had parked our cars at Alport. It had only been a relatively short walk today but given the conditions it was probably a wise move. As a result of the rain I haven’t managed to take many pictures or do an episode of the Podcast, I did however record a quick before and after AudioBoo for you to have a quick listen to. Thanks for stopping by to read this pretty short post, its a great route than can be done easily in 3-4 hours even with a few break along the way to take in the history.