Not every walk has to be an epic, with 25+ miles in a day or with thousands of metres of ascent. My friend Ray & I had a spare day so we decided we would go to Alport for a wander down Lathkill Dale. We picked up some food, filled a flask with coffee, grabbed my GoPro, Zoom H1, my DSLR and then headed out the door.

After a short ride in the car we arrived at Alport to begin the walk, the sky was pretty overcast but the MET Office had promised some better weather later in the afternoon so off we went. We picked up the path that runs along the side of the river and followed it up to Conksbury Bridge. 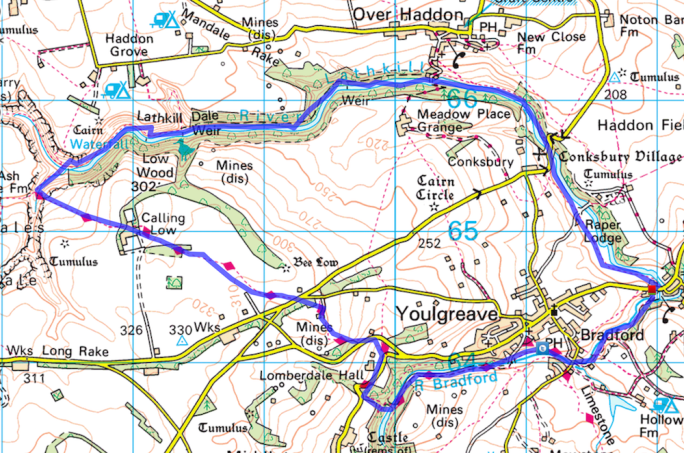 After crossing Conksbury Bridge the route then takes you along the opposite side of the River Lathkill up towards the weirs. I had remembered to bring the fully waterproof cover for my GoPro today so if you watch the video above you’ll see some of the underwater footage.

After I had finished messing about in the water with my GoPro we continued the route up the dale where we crossed in to the section of the Derbyshire Dales Natural Nature Reserve here in Lathkill Dale. If you would like to find out more you can head to Natural England’s website at http://www.naturalengland.org.uk. “The Derbyshire Dales National Nature Reserve is a series of unconnected limestone dales in the Peak District National Park. It is managed by Natural England and has a permanent staff of wardens who carry out conservation works and ensure the dales are usable for recreation”.

Lathkill Dale has a history of lead mining and you pass many small mines as you wander along. On the north side of the valley near SK 1960 6612 you’ll see the remains of the 19th-century Mandale Mine, there is also an old aqueduct and the ruined pump house, this was used as one of the last attempts to keep the mines drained and workable.

After you leave the Derbyshire Dales Natural Nature Reserve you come to another of Lathkill Dales great features, the Tufa Dam at SK 1810 6570. Tufa is a soft, porous, calcareous rock that forms in springs, waterfalls and lakes
of limestone regions.

When we reached the footbridge over the river at SK 1746 6548 we decided that the grass bank nearby would be a great spot to stop for lunch, thankfully the sun had begun to shine through the cloud so we made the most of it.

After what was supposed to be a short break which eventually turned in to 30 minutes sitting by the river, we packed away and made our way over the bridge to join the Limestone Way. The route from here takes you steeply out of the Dale and you may wish to catch your breath before going for it. I was talking on video before hand so we just went straight for it and I my legs felt like jelly but the time I reached the top, we did power all the way up quickly without stopping so I guess it was due to that.

After the sharp climb out of Lathkill Dale you will be pleased to know the route takes a gentle amble across some great white peak farmland before you begin the drop in to Bradford Dale. The Limestone Way is clearly marked as you cross stiles, roads and pass through small pockets of woodland.

After a few small sections of road walking you eventually turn off and head down in to Bradford Dale. The last time I was hear it was absolutely chucking it down when I walked the Limestone Way from Matlock to Castleton. Thankfully, the weather was vastly better today and it was great to see what the Dale looks like without all it’s summer undergrowth.

I recorded another snippet of underwater footage with GoPro at the dams here in Bradford Dale which is included in the YouTube video at the top of the page. There is a little ‘easter egg’ in there too and you may recognise the music before you spot what I mean :-).

The sun was really shining by the time we reached the open part of Bradford Dale, it really was a joy to be out enjoying what little fine weather we have had recently. Although the sun was shining it was still rather a little cold to utilise the Swimming Area in this part of the dale. For future reference, if you fancy a wild swim then you can head to this spot on the river at SK 2118 6408 for a dip.

After another quick coffee break on a bench near the swimming area we made our way down the river to Alport. It’s a great little meandering section with some very interesting Limestone Cliffs that are just begging to be climbed. In no time at all though we were back at the car and another walk had come to an end. It really is an enjoyable route, I have done it a handful of times over the last few years and there always seems to be something different to see as the seasons come and go. At just over 9 miles it is a great wander if you have around 3-4 hours spare, We took a little longer than usual today as I was messing about with my GoPro and we also enjoyed a 30 minute coffee break in upper Lathkill Dale.