For the first outing in my new Luxe HexPeak v4a I arranged an overnight Peak District adventure with my friend Rich aka UKWildCamper on YouTube, we met up at the Rambler in Edale for a quick pre walk drink before leaving the warmth of the open fire and heading off out in to the elements. The forecast had threatened heavy rain but we had no intentions of cancelling as we both wanted to test out some new bits of kit. I wanted to test the HexPeak before my Tasmania trip and Rich wanted to test out some items for his TGO Challenge walk across Scotland in 2017. As we climbed up Grindslow Knoll on Kinder Scout an icy cold wind began to blow and darker clouds arrived to obscure the sunset.

When we reached the top of Grindslow Knoll the conditions changed, the rain arrived which quickly turned to snow. We didn’t really have a plan in regards to where we were going to camp, we had talked earlier about perhaps heading for the western edge of Kinder to watch the fireworks. The arrival of the blizzard helped us decide that the Woolpacks would be ideal, we could get out shelters pitched before losing too much light. I’d only pitched my HexPeak once before in the garden so I anticipated needing the light for my first attempt out in wild.

We walked around for a few moments before settling on a nice little spot overlooking the Vale of Edale, there were a few rocks that could act as wind breaks during the night. I wasn’t sure how well my shelter would handle the blustery conditions so staying out of as much of it as possible was probably wise this time. The snow was still coming down as we hurriedly pitched up on the best bits of level ground we could find, I was very impressed at how easily the HexPeak was to set up even after that quick go in the garden. It wasn’t long at all before we had got all our kit inside and got some food cooking as the darkness arrived quickly. We then settled in for an evening of trying to be social whilst shouting across to each other over the noise of the blizzard that was whipping away outside :-). 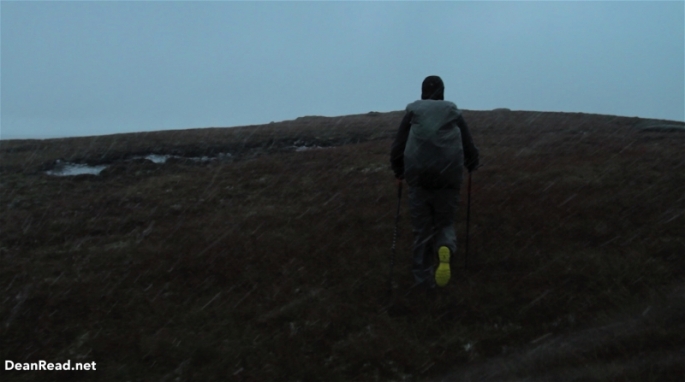 I had a really good sleep and was surprised at how warm I’d been during the night considering the temperature outside, I’d got my Vango Ultralite 1300 on this trip but after adding a few layers I was very comfortable. Normally I would sleep in my down jacket when I get cold but this time I decided to add a couple of fleece layers instead and was happy with the results. My Berghaus down jacket is great but it is one of their cheaper models so I sometimes feel the space it takes up in my pack isn’t worth it for the level of warmth it provides. Thankfully that nights sleep in extra fleece layers helped me decide not to take it to Tasmania, space in my pack for the 6 day trek along the Overland Track is tight as we have to carry everything including all of our food. 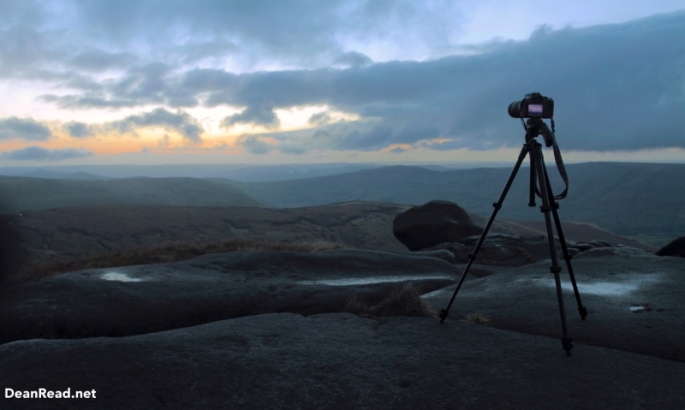 I stuck my head out of the tent expecting to be in heavy cloud cover but was very happy with what I saw, the sun was moments away from rising over the eastern moors and I quickly jumped out to set up my cameras. Thankfully I’d decided at the last moment to bring both of my DSLRs, I had my usual Canon 7D and also my old Canon 550D paired with a 75-300mm lens.

I pointed the 550D in the direction of the sunrise and set it rolling just in time to capture the stunning colour changes in the sky, If you watch the video you will see what I mean. The sun was rising above Castleton and the smoke/steam from the chimney at the Hope Valley Cement works made for a great time-lapse. Capturing moments like that make it feel worth the extra weight of multiple cameras.

The wind was very cold this morning, I had all the layers on that I could find to stop me from freezing while I watched the sun do it’s thing. After all the action had died down I put some water on the boil for a coffee and to make some breakfast, while I began to pack away my kit. 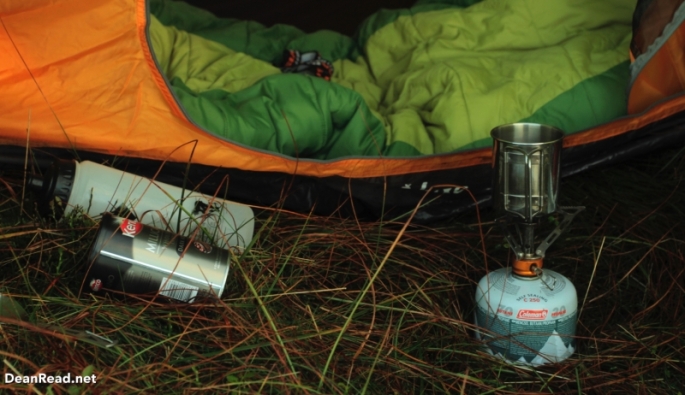 I’m very impressed indeed with the Luxe HexPeak after my first proper overnight experience inside it, I’ve been eyeing them up for a long while but didn’t want to betray my faithful Wild Country Zephyros 1. It had been a good tent over the years but sadly I had broken it, the zip pull came out of its runner and I accidentally cut a hole in the door while trying to fix it during a snowy trip on Kinder earlier in the year. After watching videos by Sandy aka Wiltshire Man and Mark aka Barking Badger I knew I had to get a HexPeak, they had both taken one with them on their West Highland Way adventure and after watching I was sold 🙂

The inside of the HexPeak is very nice indeed, the porch is a great size for storage / cooking  and the inner is perfect for my height of around 180cm. I decided to use the Alpkit Carbon Poles that I’d purchased from my friend Graeme aka Black73Cat instead of buying the additional pole with the shelter from backpackinglight.co.uk. If I’m honest… I’m not a huge fan of spending money on kit, I’d much rather spend it on experiences than objects. I paid £159 and I feel that for the price it ticks all the boxes for me. The build quality seems excellent so far, it comes in at a good weight of around 1260 grams and  the design is great looking. I’m yet to find any faults but I do know other people have made a few modifications to theirs, the addition of a few extra guy lines for stability in high winds will be my first. My friend Matt aka Hillplodder has written a great post about the modifications he has done to his HexPeak. I’m really looking forward to testing it out in Tasmania though and I’ll be reporting back after a few more pitches.

After caffeine and food had been consumed I packed the last few items of kit away, I had to be home for around lunch time as I was working the night shift again from today. We set off towards Pym Chair after making the call to head for Brown Knoll and then back down to Edale via the Chapel Gate path. I know it is controversial but I was looking forward to returning to Brown Knoll to see the new flag stone path. The last time I’d walked across that notoriously boggy hill it was an absolute quagmire 🙂 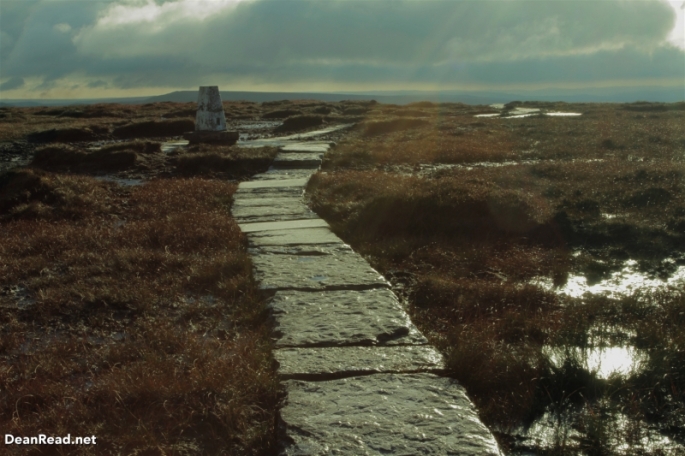 Flagstone paths are appearing in many areas of the Peaks, some say it tames the wild moorland but I understand that conservation needs to be a priority. The Moors for the Future organisation are doing an excellent job in protecting the landscape for future generations and reversing years and years of damage to many areas around my beloved Peak District. Brown Knoll is now passable without going knee deep in bog during the wetter months :-).

After comfortably crossing Brown Knoll we joined the Chapel Gate path, another route that has been controversial in recent years. It was once a haven for mountain bikers as it was a rough and ready way of arriving in the Vale of Edale, it has since been resurfaced making it a little less extreme for those who wish to ride down it. None the less, it carried us down to our destination and in no time at all we were walking along the road in to Edale. We had parked our cars at the Rambler Inn for the night after asking at the bar yesterday and paying the £5 fee, keep that in mind if you are looking for parking yourselves. Once again, another great mini adventure in the glorious Peak District with great company. It was also a valuable test of kit for both myself and Rich and I’d like to wish him the best of luck on his TGO Challenge crossing in 2017.

Thanks for reading and for taking the time to watch the video if you did. If you would like to subscribe to my YouTube channel you can do so at http://bit.ly/YouTubeDeanRead.

All music in the video is by Dean Read. Footage shot with a Canon EOS 7D DSLR with a Canon EF 50mm – f/1.4 USM Lens, Canon EF 17-40 mm f/4.0 L USM Lens, RODE VideoMic Go Microphone with a RODE Dead Cat Wind Protector. I also use a DJI Phantom 4, a GoPro Hero 3 Silver, an iPhone 6 Plus and it was edited in iMovie.