The 9 Edges Challenge is a 21 mile route that crosses 9 gritstone edges in the eastern Peak District. It’s an annual charity event put on in aid of the Edale Mountain rescue service that pits walkers, runners and climbers against some famous Derbyshire gritstone edges. Derwent, Stanage, Upper Burbage, Lower Burbage, Frogatt, Curbar, Baslow, Gardoms and Birchen are all crossed in a route that takes you from Fairholmes down to Robin Hood. I first did this route back in 2012 off my own back as a personal challenge and it has since become a firm favourite. I wasn’t 100% sure what the official route was so I grabbed a map and plotted out something that looked interesting. Fast forward to 2018 and I’m part of a group who are tackling the Yorkshire 3 Peaks challenge in June. I’ve been tasked with sorting out some routes to get us ready and I thought the 9 Edges would be a great trek to get some miles under everyone’s feet.

The first time I did the 9 Edges I wrote a comprehensive account of my adventure, I’ll leave you with some pictures from 2018 and then include the original 2012 blog post below.

I initially thought that this would sadly end up being a walk free week, work and other commitments had conspired against me it seemed. Thankfully situations and arrangements changed so I had Saturday free to go off and do whatever I wished. I had read an article a few weeks ago about a route called the 9 Edges Challenge, it was a charity event run by the Edale Mountain Rescue Service. I decided that i would give it a go as I’d got the whole day free, I opened up ViewRanger in my iPhone and began plotting a route. I hadn’t managed to find any route files or descriptive blog posts so I just plotted away as best I could.

The 9 Edges in question Derwent, Stanage, Burbage Upper, Burbage Lower, Froggatt, Curbar, Baslow, Gardoms and Birchen. The start point was going to be Fairholmes at Ladybower then the eventual end point was Robin Hood near Baslow. My girlfriend Lisa very kindly offered to give me a lift to the start point, so that was all the pieces in place. 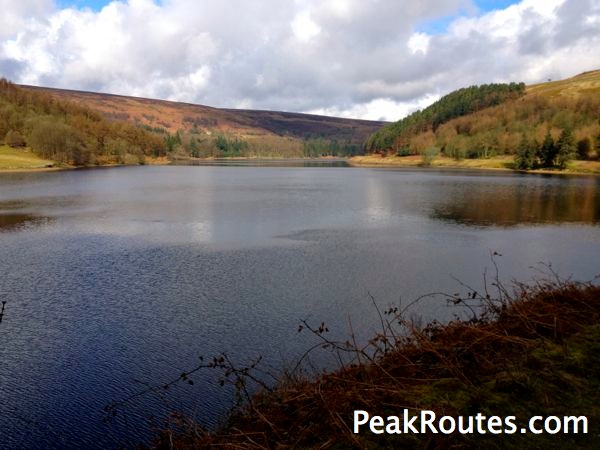 I arrived at Fairhomles at around 10:00 and didn’t waste any time in getting on my way. I set off from the car park and headed off towards the Derwent Dam wall. I took the path off up towards the walls eastern side and then joined the road heading north. I then begun the climb up Walkers Clough at SK 17369090 towards my first edge of the day which is Derwent Edge, more specifically though my first peak which was Back Tor. 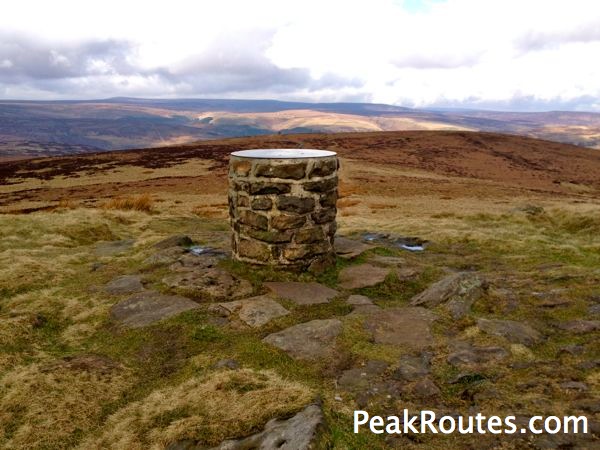 The views today were stunning, I had been really lucky with the weather thankfully and the views in all directions were great. I arrived at Back Tor in no time at all, there was no time to hang around at all today so I was tramming along at full speed. 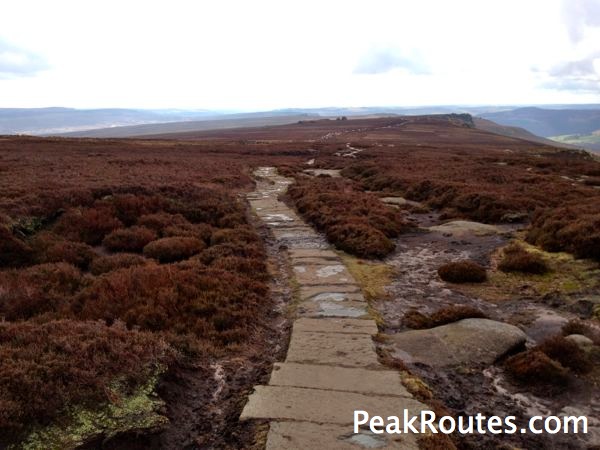 After Back Tor I begun heading south along towards Doverstone Tor via Cakes of Bread. Once again no stopping today so I moved straight on from there towards the Wheel Stones and then I swung south east towards Moscar. After a short little section eastwards along the road I turned back to the south again to begin the second edge of the day which was Stanage.

Stanage is the longest edge of the challenge, a haven for climbers and a very popular area especially at weekends. I decided to have a quick lunch break for 10-15 minutes on High Neb, I sat just off the main path on the edge and admired the views across Bamford Moor down to Bamford Edge. 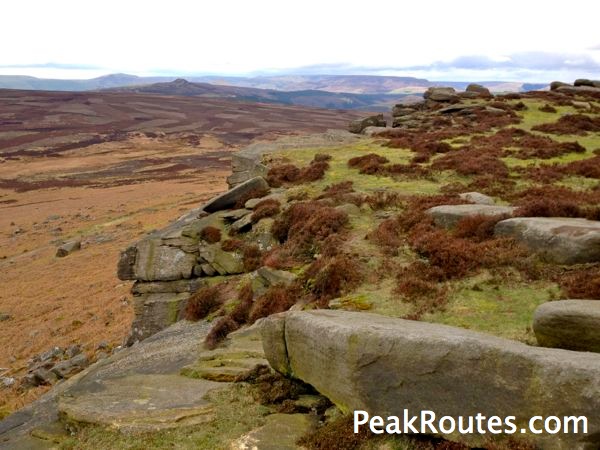 As i’m the sort of person the likes to have the hills to himself (selfish) I tend to avoid walking at weekends. I’d never been to Stanage at a weekend before and I was surprised at just how many people were out enjoying the outdoors today. There were hundreds of climbers tackling the numerous routes up this world renowned Gritstone Edge today, the jangling of clips and carabiners was a constant back drop to my wander along Stanage. There is some serious climbing to be had along here, I do believe that when doing the official 9 Edges Challenge climbers have to tackle a route on each Edge. I’m very in awe of anyone who can climb well, its something i’ve never had the oppurtunity to try seriously yet. I’d love to give it a go so would welcome an invite from anyone who wouldn’t mind a total newbie tagging along 🙂

After Stanage my next edge of the day was Upper Burbage, I was making great time as I’d been going at a good pace for the last hour or so. I crossed the road at SK 26038300 at the Bridge over Burbage Brook and then joined Edge number 3. these next 2 edges are pretty short indeed. It was very long before I’d finished Upper Burbage and was heading on to number 4 which is Lower Burbage. I had been toying with the idea of stopping for a coffee or some form of refreshment at the Fox House Inn, As I crossed the boggy moor towards the pub I didn’t feel the need so I just kept going. I crossed the road and then headed down into the Longshaw Estate.

It had been a long while since I ‘d last visited Longshaw, If I think back now it must have been back in 1997 while on a field trip with school. We had come to take depth measurements along the River Derwent and had made a side stop here. Longshaw was pretty busy today too but it wasn’t something I minded, the more people who visit the more work the National Trust can do to keep this area in good order.

A short dash through Longshaw then I was back out on the road at SK 25947817, thankfully it was only a small road section down past the Grouse Inn. I then joined the footpath at SK 25407762 to head towards edge number 5 of the day which is the short but sweet Froggatt Edge. The midges were out in force in the forest leading along to the edge and I dashed through them quickly so as not to get eaten alive 🙂 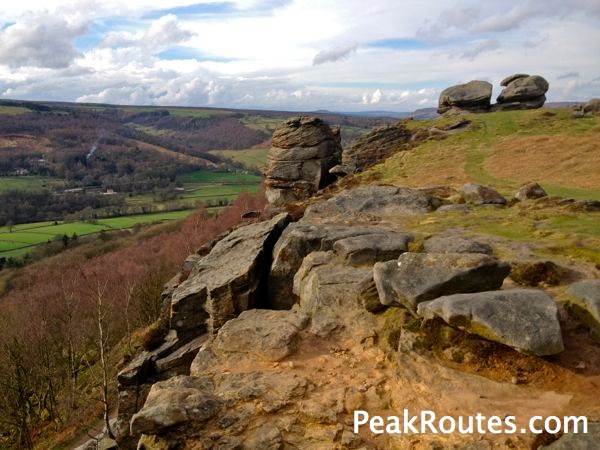 I stopped for a short break on Froggatt Edge at the point where it eventually turns into Curbar Edge. The remaining edges of the day are all pretty short so I knew that the challenge was in the bag as I felt in top shape. 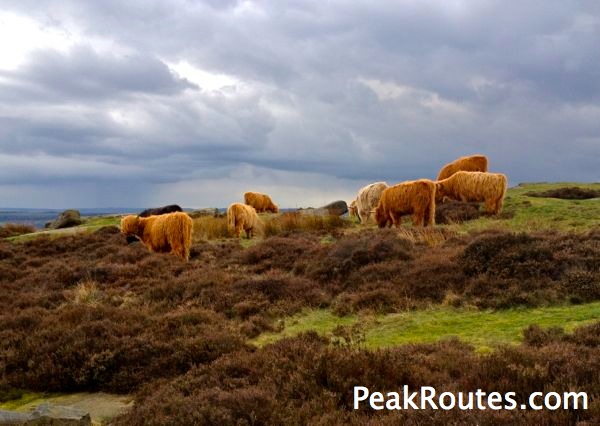 Curbar came and went pretty quickly, the only obstacle here was the herd of Highland Cattle that blocked the path. I saw it as a blessing as I’d been meaning to get up here and take some pictures of them. 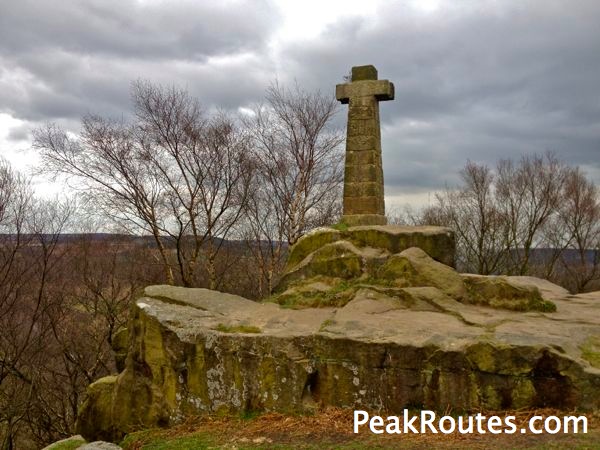 The 7th Edge of the day was the very short Baslow, there was a small group of Climbers and a couple of people Bouldering on the rocks below. At the bottom of edge number 7 I swung towards the east and headed straight for Wellington’s Monument at SK 2642 7369. A short burst of rain had arrived by the time I got here so I was pleased to be heading down through the forest at this point. I worked my way down until I came to the bridge across Bar Brook, the house at SK 26827346 has a very cool looking bridge over from the road.

I crossed the road just as the rain had decided to turn to hail, no bother though as It was short lived as I marched on up to the 8th Edge of the Day. Gardom’s Edge was the penultimate Gristone offering of the Challenge and it was totally deserted, not a soul about as I made my way along it before heading down towards Robin Hood.

In what seemed like no time at all I was down at the road and heading along towards the Robin Hood Inn. I passed by the pub and headed up the path just after it towards the final edge of the day, Birchen Edge. As I walked up the hill at the base of the edge I passed another herd of Highland Cattle before climbing up to the top. I walked the last few hunded metres along to the finish point while listening the Mark Knopfler’s song “Piper Till The End”. The heavy dark clouds all around me suddenly begun to part and the sun broke through in spectacular fashion, it was a perfect way to end what had been a thoroughly enjoyable day. I’d never been to Nelson’s Monument before and I lingered there for a while while recording some video and another piece for the Peak Routes Podcast.

What a great day indeed. I’m not 100% sure how my route campares to the official challenge route but I did the distance and ticked off all the Edges. The day had passed so quickly and it seemed like a lifetime ago that i’d set off from Fairlholmes. According to ViewRanger it had taken me 6hrs 37minutes, covering a distance of 32.6km and with 994metres of height gain.

All music by Dean Read. Footage shot with a Canon 7D with a 17-40mm lens and it was edited in iMovie.